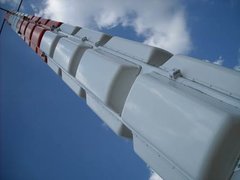 The manufacturing of Antenna Systems for Radio and TV applications is absolutely one of the main flagships of Telsat.

Thanks to its internal engineering structure, which includes some of the best designers in the market, Telsat has become a lead designer and manufacturer of complete turnkey systems. The antennas made by Telsat are among the most accurate, reliable and durable on the market (Telsat considers the average life of a system around 25-30 years).
The secret of Telsat success in this field can be identified in the continue research and choice of the best components and materials in the market, in the accurate design and realization of the antenna main supporting structure and in the capability of its engineers to operate on all the main software for antenna systems design, which are available in Telsat laboratories.
For all these reasons we can state that Telsat has the total control of its systems, being able to optimize them to realize the signal coverage just as the project requires: Telsat manages its antennas as real spotlights.
Another key point in this field is the choice of the feeder cables: they are the components which can strongly affect the results either on the technical performances either on the commercial point of view.
For this reason Telsat has created a long-term commercial cooperation with Commscope® (which purchased the famous Andrew Company), that is one of the main manufacturers operating in this field. With such relationship Telsat got the official distribution of their Air Dielectric Cables (Heliax®) and related accessories, which are very strategic in the broadcast market approach.
Telsat owns a stocking area of over 8000 square meters, which allows the constant availability of big quantities of these items, in order to quickly satisfy internal and external demands.
Aside to antenna components and feeder cable, Telsat has developed another important product category: the dehydrators.
Basically Telsat offers to its Customers two different models: the GOBI77 and the GIBSONXF4, which are very flexible and reliable and can be employed in most of the antenna installations.
Last but not least, the antenna system configuration is completed by the passive elements as filters, combiners and possible patch panel.
Telsat chooses, even for these components, the best products available from the key major manufacturers, always taking in consideration the economical point of view, but never affecting the technical performances, to deliver to its Customers always the best solution possible.
Visit now: Broadcast Antenna Systems section.